I recently found my collection of quotes from Bible school teachers, and found myself laughing till I cried over some of them.  Probably the fact that I can still HEAR their voices in my head makes them so funny!  Thought some of my NBBI friends might also enjoy a trip down memory lane!

Truth is the greatest defense against error

Could be doing a little pharmaceutical experimentation there!

Liars have to have good memories

There’s Greek name for that – bologna.  Actually, I think that one’s burnt bologna!

Do I really exist, or am I just somebody’s worst nightmare?

God will never drag anyone, kicking and screaming, into heaven

I would love to have this book, but I’ve never been able to get my hot little paws on it

You can’t value what you don’t know

Joseph Smith got his revelation from angels too; he just couldn’t make up his mind as to what the angel’s name was!

What will be on the pop quiz?  It all depends on how many spikes I eat for breakfast that day!

Well, maybe he wasn’t INSANE exactly.  I don’t think he was trying to eat his breakfast by stuffing it in his ear!

File that in your “useless” file – for now!

Probably the result of some pharmaceutical recreation

She was – forgive me for this, ladies – a tank!

How many of you have seen a picture of Thomas Newberry?  Well, it’s just as well; he was a scary looking guy

Looked like he was baptized in vinegar and lemon juice, and had been eating pickles all his life

Now, when you think of a baby – cute, loveable, screaming little monster…

When a Christian sins, God isn’t going to sit back, wring His hands and say, “oh my, NOW what are we going to do?!”

I’m not sure what happened to our bell, but it sounds like it needs a few vitamins!

Engagement is a guy telling a girl, “I won’t just take you out for Friday supper and feed you – I’ll stock your refrigerator!”

Now, you’ll likely someday meet someone whose spiritual gift is to be grumpy!

My motto is, “Why be difficult when, with a little more effort, you can be impossible?”

They were about as affectionate as a block of ice!

They’ve been smoking their deodorant, not wearing it

Those who ignore history are doomed to repeat it

Boy to girl: I lost my phone number….can I have yours?

“To be young is not to be dumb”

You look just like your dad. “Great.  At what age?

She was spunky and full of life.  As a kid, we were held spellbound by her story-telling abilities, only to be shocked mid-sentence when she’d suddenly whip a spray bottle out from behind the flannel graph board and spray us all thoroughly in the middle of telling how Jesus walked on the water in the storm, and how Peter began to sink when he took his eyes off Jesus.  Talk about bringing the story to life!!!

She was strong.  I always admired how she’d just head off to wherever she was supposed to be next, leaving Arlyn behind, still chatting with someone!  She’d show up to chapels, meals, class – everywhere – punctually on time, while Arlyn would trail in much, MUCH later,  I never saw harping and contention there – she just took off and went, leaving him to follow when he was ready.  She didn’t need to wait for him — didn’t need his presence to bolster her.  As a shy person who sometimes hides behind my husband or child’s presence, I admire this!

She was gentle.  If I close my eyes and tune out this present world, I can put myself back in the corner of the chapel at KBI and still hear her mellow, gentle voice, and melodious laugh.

Our loss is Heaven’s gain.  Someday we’ll rejoice again with the Treasures we’ve lost on this earth. 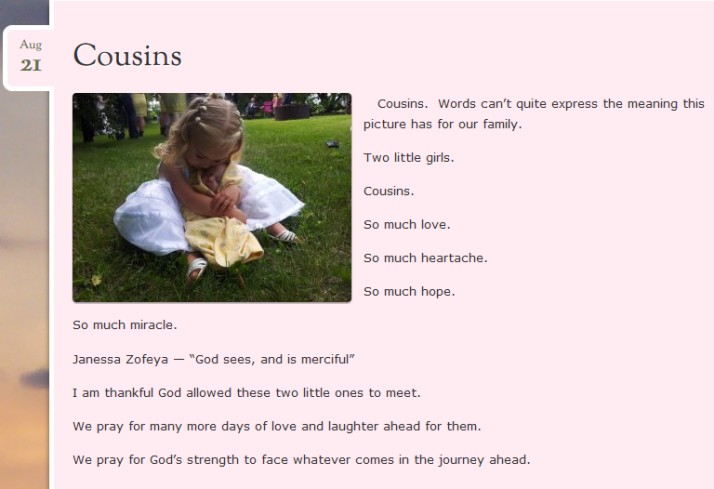 They had three years of days, these two sweet little cousins.  Three years more of growing, of prayers for Baby Cousin’s hole in her heart.  Of singing songs, and making silly faces, and hospital visits, and lots of NO visits and staying home and keeping our little kid sick germs to ourselves.  Three more years of celebrating birthdays and miracles, and buying presents at Christmas, and drawing pictures for each other.  Of taking Janessa’s picture to school for show ‘n’ tell and telling her friends about her miracle cousin.  Of dancing so Janessa could watch, and ringing her chimes, and hunting through every store in VV and half the ones in GP, looking for the exactly right kind of rattle that Janessa could hold and play with.

We are left with Janessa’s toy car, forgotten at our house.  With Ballet Bear, passed on down to Elianna.  With empty hollow hearts and oh, so very many tears.  Janessa was just here.  Elianna was just dancing for her, just days ago, in our living room.  And then — gone.

She’s lighting up Heaven now with that bright smile.  No more oxygen.  No more sickness, no more pain.  Little legs that are strong and now SHE can do the running and jumping and twirling and dancing.  Instead of praying at bedtime and asking God to make Janessa strong and healthy, Elianna thanks Him that He is taking care of her now and that she is safe with Jesus.

Janessa Zofeya — “God sees, and is merciful”   In her life, this was true.  And in her death, it is still true.

For the last post,  which wasn’t supposed to be posted,  but saved for later instead.   However,  it posted and apparently my shift was a cabbage!  I think it’s time to blog from my laptop,  not my phone!

Occasionally I have to drive to a “nearby” town an hour away for work.   The roads are often terrible, and my previous shift had been cabbages

Every few months,  my living room looks like this:

The sorting process drives my neat-freak side a little crazy, and I still haven’t figured out a very good storage method,  but the end result is that Elianna’s dresser is stocked for another season and I haven’t spent a penny.

I’m so thankful for all the hand-me-downs people have given us for her!

Well,  I wrote a post,  and then promptly lost it,  and typing on my phone is a bit of a painful process,  so I’ll just sum it up and leave this link and two screen shots of Jerry’s Facebook post that tells the story better than I can:

#38 — I am SO thankful this little 6 yr old boy is safe and back at home.   #39 — I’m thankful Jerry & Laine & Julianne got to have a part in the exciting story.  #40 — I’m thankful for how God answered prayer and led them right to this 6 yr old “needle in the haystack” (acres and acres of bush were being searched and miles of back roads all around his home area).  #41 — I’m thankful for my own little prayer that was answered, that God would stop the rain before to got to New Fish Creek.  (It was raining so hard on my way home from work at 8:20 that I could hardly see where to turn off the road.   Yet a few miles north of us,  the rain did not start until they had found the boy and gotten him safely into a vehicle.

I can’t imagine what his family felt as they searched for him all day.  #42 —  I’m so glad he didn’t spend the night outside, because the story could have been much different.   #43 — I’m thankful for safety for Jerry,  Laine,  & Julie as they searched in the dark in the bush with no gun!

33.  Thankful for a few slower days at home this week.  Last week I worked 5 days straight and then fell behind at home… so it feels good to catch up!
34.  Thankful I don’t HAVE to work full time.  I work because I enjoy it (and the extra $ is definitely a huge plus!) but I am glad Jerry is past school, and work can stay casual and there is no pressure anymore.
35.  Thankful to work for a company that encourages continual learning and pays for courses for us.  Last week’s 2 day Supportive Pathways course was so helpful for learning how to better care for our clients with dementia.   It was good to have the chance to stop and look beyond the diagnosis to the PERSON that is still there underneath.  It is heartbreaking to watch them slowly lose themselves, and the family too.  Dementia has been described as “the longest goodbye.”  It was good to learn how to walk beside them in this journey and best help them them.

36.  In spite of the last several rainy days,  I’ve been enjoying the beautiful colors.   I’ve been gone from NB long enough that AB falls are looking beautiful again 😉 (their colors are SO much more vibrant than ours!)
37.  Thankful for our first good tomato crop since we got married!!!  Apparently pruning before mid-August really helps.   Who knew 😛 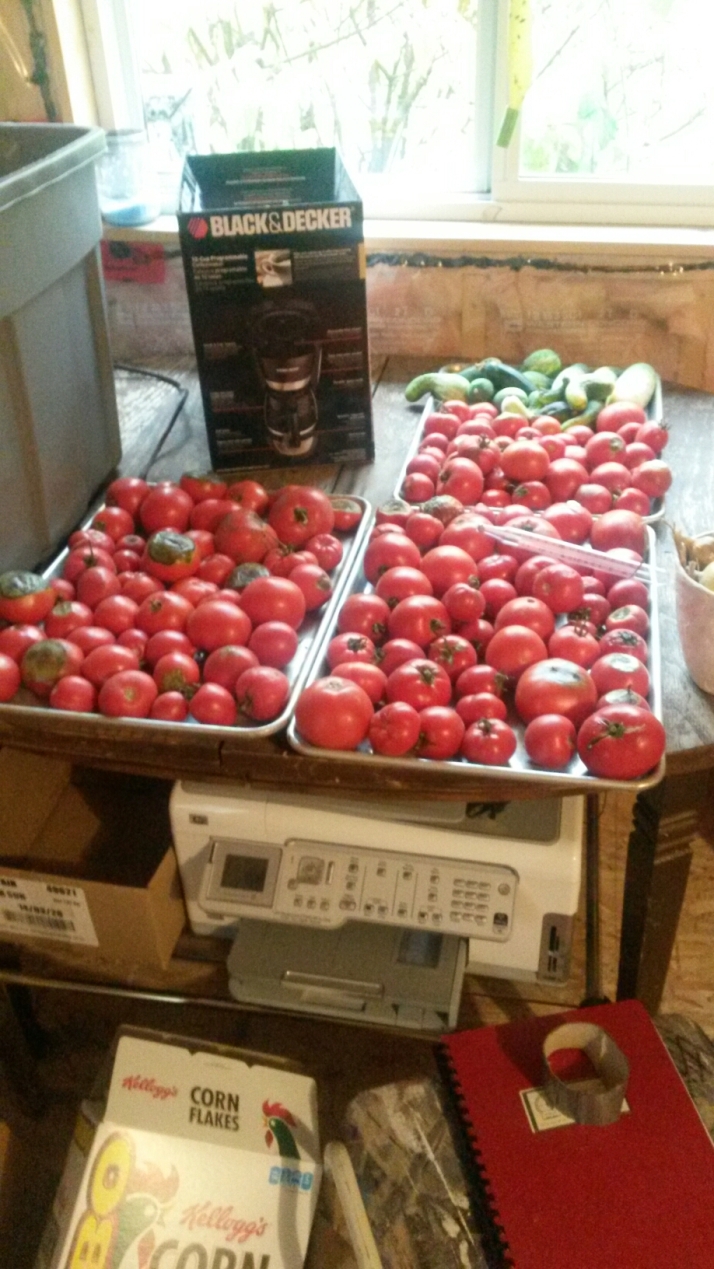 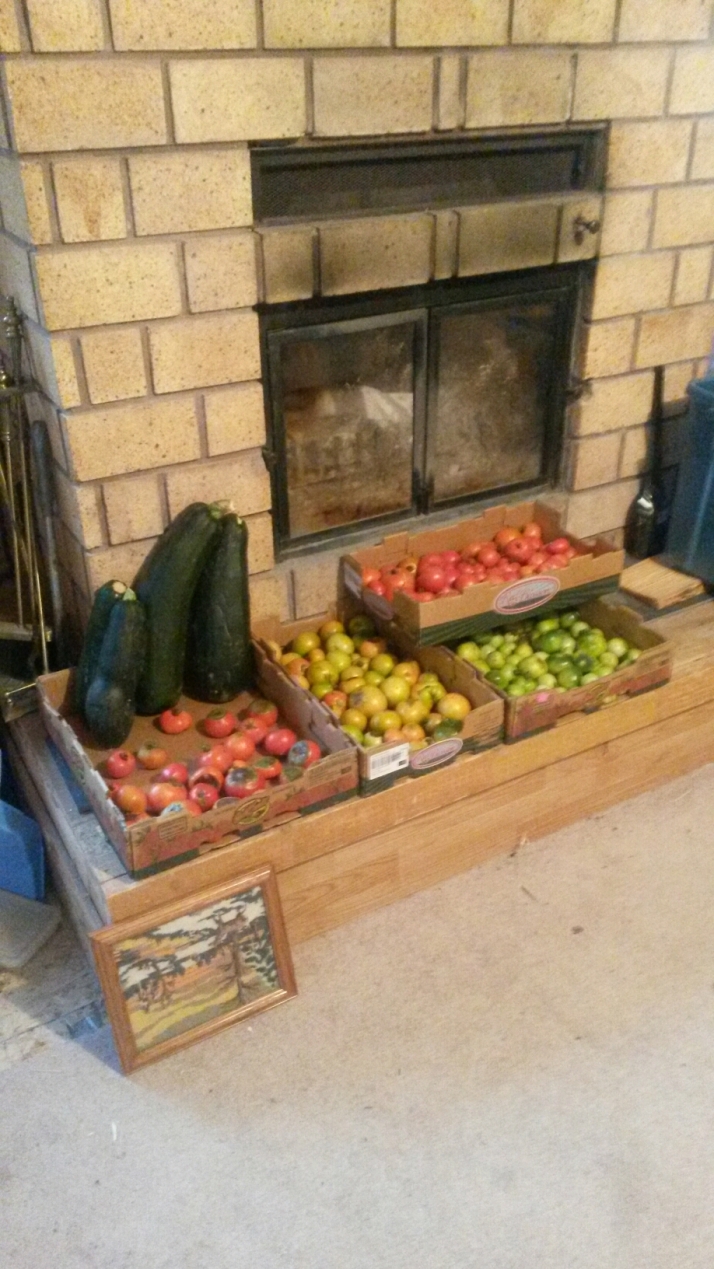 Good tomato crops are huge, for a Siebert.  Even if this is still a far cry from what Dad’ s 170 plants produce,  I’m happy :)